The language(s) of science: part 2


This is the continuation (and end) of the Language(s) of Science series that we started here. It's a long one, so let's dive right into it. 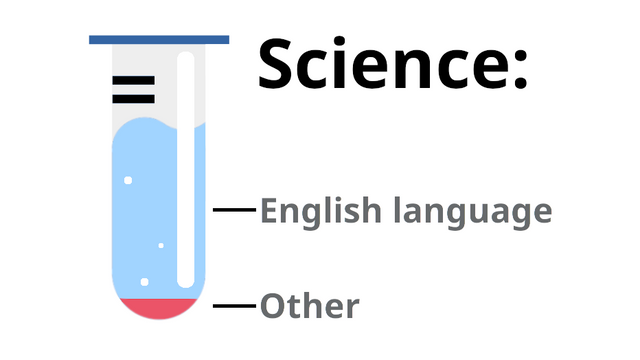 English is the language of science

Today, English is the dominant language of science. There are many factors - political, economic, social, or regulatory - that help explain this phenomenon. The geopolitical dominance of the British Empire and then of the United States in the last few centuries gave the language a head-start, and a momentum. Rich English-speaking countries are some of the most prolific in terms of scientific output. The quasi-totality of the most influential scientific journals are English-language, and an oligopolistic academic publishing sector reinforces a monolingual scientific communication. English might be the most widely spoken language in the world, at more than 1 billion people. The "publish or perish" culture, where funding and tenure are conditional on publication performance above all else, and the incentive systems that result from this lead scientists to write in the language that will increase the likelihood of the article getting published, reaching a large readership, and garnering citations.


Intentionally or not, the whole system seems to be clamouring for English to be the language in which science is done.


The two sides of the mirror

The existence of a lingua franca in science has undeniable advantages. It removes all linguistic barriers – except one – to communicating and accessing scientific developments the world over. It underpins the internationalisation of universities, which broadens the education and career prospects of students and professors worldwide. It further standardizes the production of knowledge, which facilitates organization of and access to knowledge.


The factors listed above, be they implicit or explicit, could be described as high-level characteristics of the global system we inhabit, only tenuously related to science. However, as desirable as the resulting advantages are, their corollaries are no less hypothetical, if much less researched.

A bird-eye look at the dominance of English yields some striking insights.

Depending on the scientific field, and the data one looks at, up to 97% of scholarly publication can be in English, with hard sciences being more monolingual than humanities. Even in countries with a large scientific output, articles are written in English-only, and increasingly so. Journals that used to be plurilingual are increasingly becoming English-only. Non-English-language journals are further hidden from view by their exclusion from leading journal indexes. Scientific terminology often remains confined to English, making other languages potentially inadequate for doing science. The assumption that all important information is in English biases understanding of science (the flu virus H5N1, which could have been a major pandemic, famously went unnoticed for months because it was first reported in Chinese, not in English).


At a time where science is suffering from the replication crisis and a crisis of trust, it is desirable to facilitate discussion around each and every publication, and few languages have more speakers than English. But then again, a monolingual research produced for an exclusive (if heterogeneous) readership provides for little diversity in terms of perspective, and the perverse outcomes of an English-only science weaken the local nature of research communities and remove research cultures from the very contexts that nurtured them.


...and their individual underpinnings

English is so deeply ingrained in the metrics of science that it is more a requirement than a choice.

Because the costs of translation services are prohibitively high for most scientists, few of them can afford to produce two versions of their paper, so they often choose to write in English only. This includes humanities: researchers who are interested in fundamentally local topics (the Quechua language, or Bantu traditions, or Spanish history) are increasingly compelled to publish their work in English. Those scientists who can afford producing their papers both in English and their local language need to contend with bans on dual publication enforced by most journals, which forbid papers to be republished elsewhere.


This situation is also profoundly unfair, because proficiency in English is not evenly distributed and is dependent on socioeconomic status: an English-only science provides a massive advantage to those who have English as their first language, or who have been able to access high-quality education in English.


And this disadvantage has a compound effect. Those with a poorer level of English are less likely to choose to study science, are more likely to lag behind, take longer to process their English-language material, incur more costs and take longer to produce research, are refused publication because of language mistakes, are more likely to face prejudice because of their poorer writing, are less likely to have good metrics and get funding, can even get snubbed in favor of their Anglophone collaborators in media. The list goes on. The effect is that less people do science, and a large majority of scientists work in a language they're less confident in, while those who choose to work in a language other than English have trouble making themselves visible.

An English-first science impedes the development of national and regional research communities and cultures, limits both the quantity and quality of research, allows loss of knowledge, and reduces science's diversity. While the final balance is unclear, it is undeniable that global research does not only stand to gain from a lingua franca.


Despite the criticisms presented here, the dominance of English in science is unlikely to be imperilled in the foreseeable future, because too many feedback loops within the systems that science exists in buttress this supremacy.


Of course, some mechanisms push back against this, directly or indirectly. Open-access journals, which are becoming increasingly commonplace, have many advantages over traditional journals and these qualities indirectly make the existence of non-English journals more viable. Machine translation, while still being inadequate for translating complex academic language, is constantly improving and lowering translation costs. Some of the largest journal indexes have started accepting non-English-language journals, and non-English indexes (like SciELO) are gaining ground, which in turn fuels their advocacy for a more diverse science.


But further efforts, big and small, are required. While there has not been enough discussion to identify what these could be, existing literature seems to converge on some ideas. National policies that financially support scientists to learn English, translate their work, and publish it could strengthen national, and global, research. Dual publishing bans, which benefit journals at the expense of the community at large, need to be regulated away. Anglophone journals should make efforts to welcome multilingual research, and the metrics that scientists are evaluated against need to decouple themselves from English. The negative effects of an English-first science need to be more thoroughly researched. Finally, the individual experiences of those who have had to abandon science, who struggle against a system geared against them, experiences that are deeply human, harrowing, and relatable, need to become a focus of popular science writing, and achievements need to be celebrated.


To quote another article: "The language we use when we speak science is as important as any other part in a methods section and should be deliberate and fair."

Posted 2 years ago
1
#1
Do you want to crush your language goals? Sign up here.
Want to learn more? See the other blog posts