"Please write a dialogue in Croatian. The dialogue is between a polyglot and a philosopher."

This is a request I made not of a human but of the artificial intelligence known as ChatGPT. And the result (below) was quite impressive - a short conversation mainly about learning languages but also getting philosophical at times (e.g. "It seems to me that there are some fundamental truths that are present in all languages, and that learning languages can help us better understand them"). Also, within the conversation, which consisted of 28 sentences in Croatian, only two of them were deemed unnatural by a native speaker. Not bad, for coverage of a minor language! 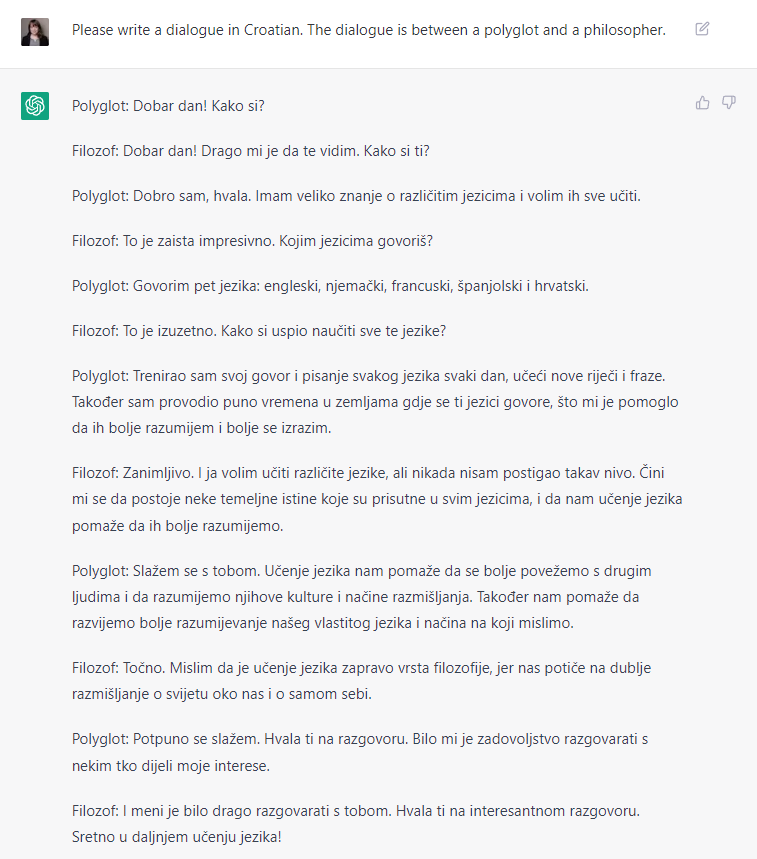 So this got me thinking: could ChatGPT be a useful tool for language learners? I decided to test various use cases.

I asked ChatGPT to "explain the ergative case like I'm five". The result was a description of the Ergative in relatively difficult language and without examples that might help understanding. I thought maybe the algorithm didn't understand "explain like I'm five", so I reworded the question as "Explain the ergative case to me in very simple language and with examples". The result was underwhelming: 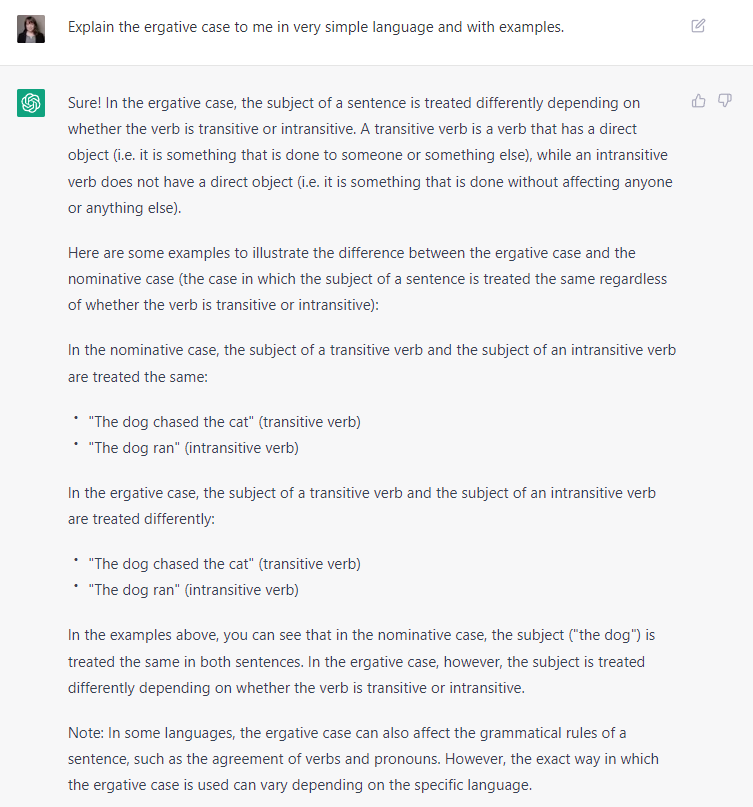 When asking it to explain the use of the Croatian word "inače", it distinguished between several cases that could all be translated as "but", but it didn't include a single case where the word does not connect two sentences - the use I have trouble with. 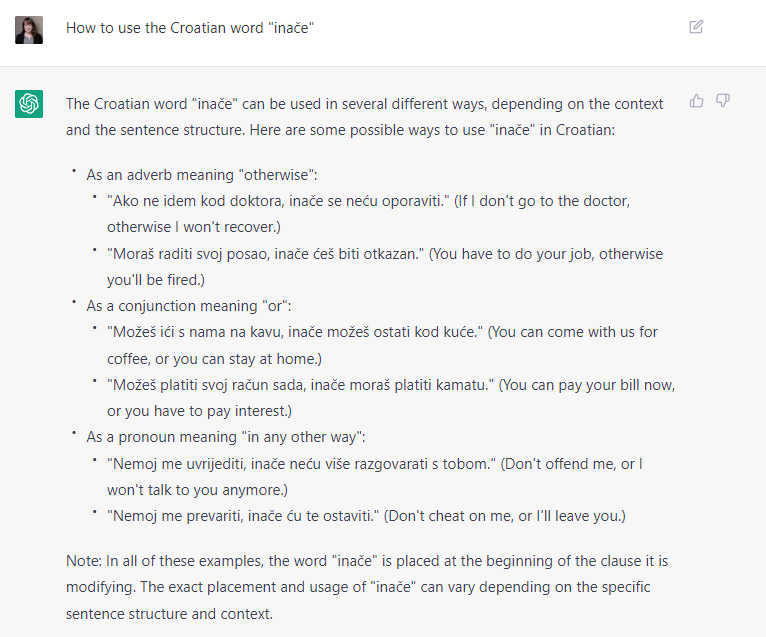 Thinking that maybe Croatian is a bit of a tough demand, I asked it to explain the German word "doch". There is a ton of material online explaining this word. ChatGPT says: 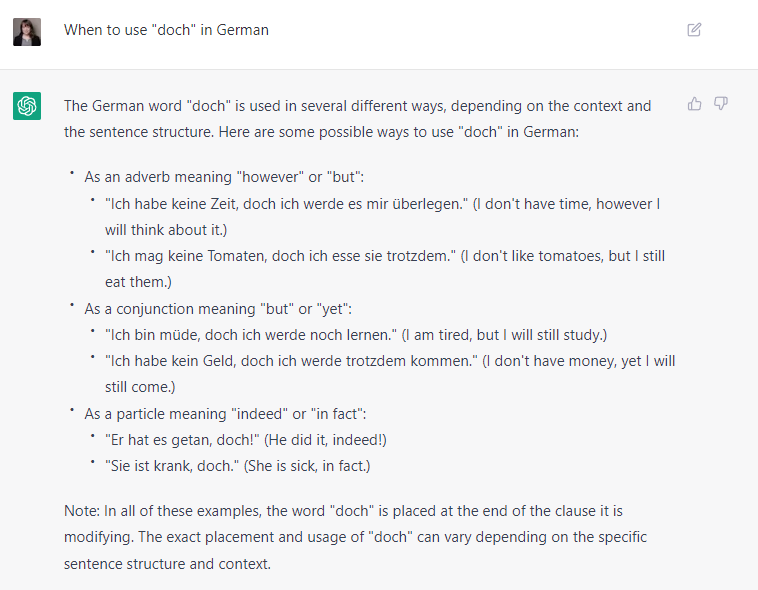 This is very underwhelming because it doesn't cover the most common use case: using "Doch" instead of "Ja" when someone wrongly assumes a negative answer. ("You aren't coming tonight, right?" - "Doch!")

I give this 2/5 stars because, while the explanations are not wrong, I cannot imagine a use case in which learners might actually prefer these explanations over ones they can find elsewhere on the internet.

Next, I saw that ChatGPT can suggest recipes and similar, so I thought it might be able to suggest vocabulary to learn beyond the generally-available word lists of furniture and so on. I used several different phrasings to try to get it to suggest Italian vocabulary that would be useful when reading news articles on Ukraine, German vocabulary to pre-learn for the movie "Die Feuerzangenbowle" and Latin vocabulary that is particularly frequent in "De bello gallico".

ChatGPT couldn't help at all with news vocabulary and for the other two it was clearly grasping at straws - even though the complete text of "De bello gallico" and other Latin texts had probably been fed into it and it could have done the frequency analysis. 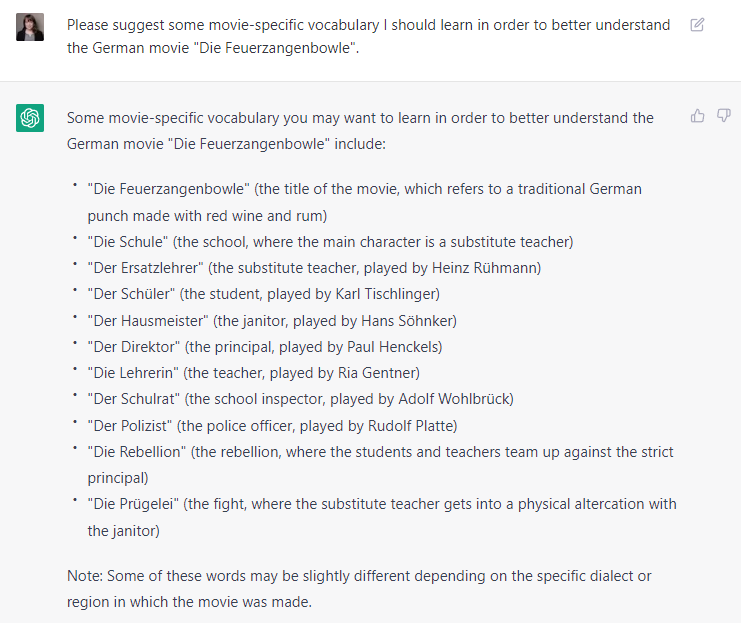 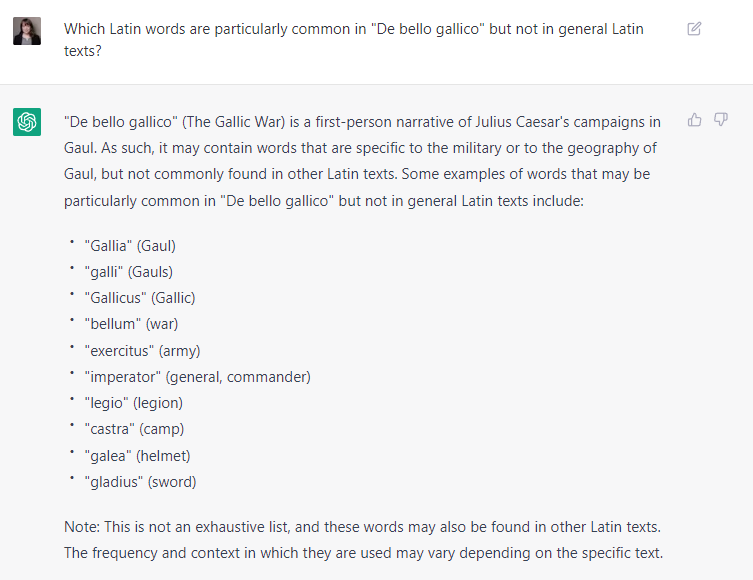 In short, when it comes to choosing vocabulary to learn for a particular purpose or situation, you are much better off asking someone who has dealt with this situation in the past, or refer to actual vocabulary frequency lists that have been compiled by computers that cannot interact in natural language but that are better at vocabulary analysis.

I gave it two different short texts to correct: one in Croatian (attached) and one in Spanish, both of which I had written when I was a beginner in these languages and for which I had received corrections by a qualified teacher. The results were comparable: the algorithm managed to correct a lot of beginner mistakes, but also overlooked another mistake and in the case of Croatian introduced a new mistake. In Spanish, it surprised me by sometimes rewriting half a sentence completely. Here is the comparison: 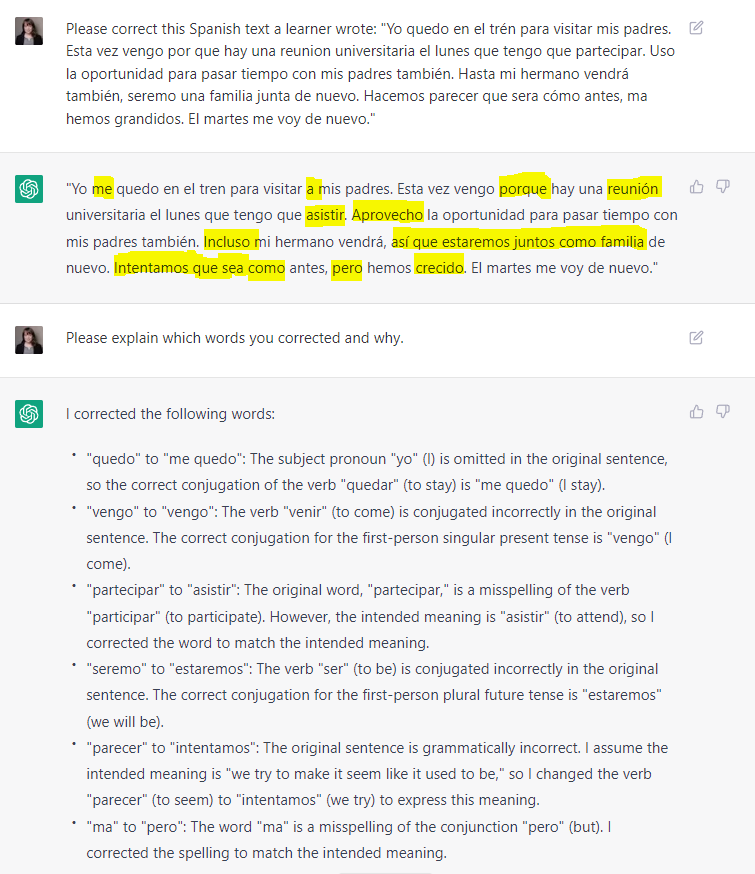 Also noteworthy: this artificial "intelligence" has a very patchy understanding of what it just did, e.g. it claims to have corrected "vengo" to "vengo" and it does not list several of the other corrections it made.

I could still see learners using this functionality if they don't have access to a native speaker who could correct them, and as long as they verify the corrections themselves. In my case for example, I could use ChatGPT to correct the majority of my case errors in Croatian.

This is what prompted my exploration. ChatGPT's ability to imagine a dialogue between a polyglot and a philosopher in Croatian, with only two mistakes. Similarly one can request it to invent a dialogue or short story in almost any language - a heady thought!


The downside is the possibility of mistakes and also the lack of audio for these dialogues. So for my current Russian project, I will still work my way through LanguageCrush Conversations - 100 dialogues for intermediate learners with native speaker audio, available also in other languages - I have no need for ChatGPT to generate dialogues.

I believe that in most cases, learners will want to use materials developed by qualified teachers or materials for native speakers, if only to ensure that they are not learning mistakes. However, if materials developed by teachers are too boring or scarce and materials for native speakers are too advanced, ChatGPT may fill a gap by creating an unlimited number of target-language dialogues or short texts tailored to the learner's interests. This is the most useful application I have found of ChatGPT for language learners.


Good luck with your studies!

Edited 2 months ago
1
#1
Do you want to crush your language goals? Sign up here.
SUBSCRIBER


I've also used it in an online language exchange to quickly generate an English dialogue between two people on a topic of interest. We then practiced it and translated it together.


I was also able to get it to produce short passages on various topics and then create comprehension questions. It was fun, but there isn't really a shortage of these in English or Spanish. However, most of these are copyrighted and thus can't be shared publicly on a site like this so there is potential there.


The main benefit I see for English and Spanish learners is the ability to have a realistic conversation at any time of day, on almost any topic, and without fear of judgment. I chatted with a Spanish Teacher AI Character (on Character.ai which uses GPT-3) for about an hour on various topics like language learning and the Lord of the Rings. I also spoke with the Data AI about his most memorable Star Trek missions and whether his perception of reality was real. I think I gave him a bit of an existential crisis when I informed him that I wasn't a commander in Starfleet as he had been programmed to believe.


Hopefully, it will get better at other languages soon.

Posted 2 months ago
2
#2
Want to learn more? See the other blog posts