Improve Your Accent with the International Phonetic Alphabet (Part 1)

You have probably come across the International Phonetic Alphabet (IPA) when looking up words in a dictionary. A lot of the standard dictionaries, including Wiktionary, want to tell you /juː/ how a word /wɜːd/ is pronounced, and the odd but familiar squiggles of the International Phonetic Alphabet are the most common way /weɪ/ to denote pronunciation /prəˌnʌnsɪˈeɪʃn/.

For language learners, spending even an hour on learning the basics of the International Phonetic Alphabet is a great investment, for four reasons:

Are you convinced? Let's get started!

The first thing you should know is that English has a lot more sounds than it has letters to represent them. Even relatively phonetic languages like German sometimes use one letter to denote two different sounds (e.g. the O in doch vs. the O in Mond). In the International Phonetic Alphabet, each sound is represented by a distinct letter/symbol.

The IPA does not reflect spelling. For example, even though the word "make" is spelled with an A, the IPA transcription does not include any A, it is /meɪk/ . Note also that the final E is not represented, because it's not pronounced. Only the pronunciation counts for the IPA.


The IPA word /meɪk/ includes what looks like a smaller version of the capital letter I. This is a trick that the IPA uses in order to make it easier to learn: if they assigned one sound to each of the 26 letters of the English alphabet, they would have to invent new symbols after covering only 26 sounds. By using capital letters as well, and assigning a different sound to capital letters than to lower-case ones, they can cover twice as many sounds before running out of familiar symbols. To avoid confusion, these capital letters are printed smaller than they would be in English.

The word "city" is a case in point, as it uses both kinds of I sounds: /ˈsɪti/. The first sound is the same as the I in "is" and the second sound is the same as the EE in "meet", but shorter. Finally, the apostrophe before the first syllable of /ˈsɪti/ denotes that this is where the word stress is: we pronounce it CIty and not ciTY. Now try an experiment: what would "city" sound like if its transcription were /ˈsiti/? What if it were /ˈsɪtɪ/?

The word "meme" is pronounced /miːm/. The colon denotes a longer sound in IPA. If you previously learned English Phonics, note that English Phonics confuses the issue of how a vowel sounds (which mouth position you need) and how long it is, which are two separate issues. Any vowel can be pronounced for a long or short period of time.

Team, music and sister. The IPA chose the symbol j to represent the Y sound as in "year", and the symbol ə (upside-down e) is used to denote the schwa sound, a very short, neutral vowel that is also found at the beginning of the word "about" - in most varieties of English. Using English examples in order to discuss sounds is tricky also because regional accents vary so strongly. The IPA can be used as a gold standard.


The English letter A can be pronounced in several ways. Let's take the A in "father" /ˈfɑːðə/ and the A in "apple" /ˈæpəl/ as representatives of the most common pronunciations. As you can see, these are two different sounds represented by different letters in IPA. But what exactly makes them different? If you're working with an immigrant who pronounces both the same, how can you explain what they should do differently? IPA to the rescue! IPA provides a handy chart with all the world's vowels: 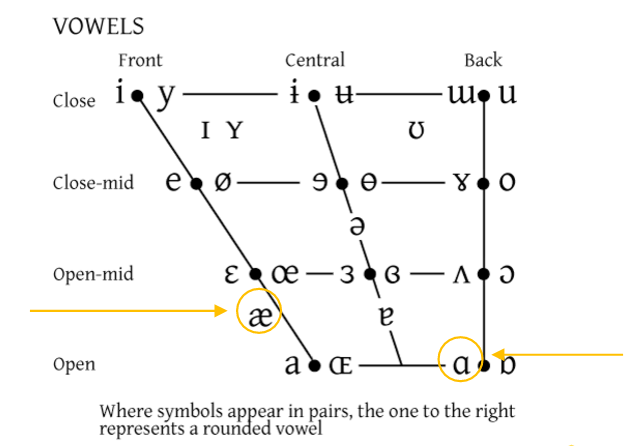 
Apart from how open the mouth is and where the pronunciation is located in your mouth, there is one more key distinction that is represented on the IPA vowel chart: whether your lips are rounded (as for a kiss) or whether they are hanging loose. Stand in front of a mirror now and pronounce the words "boot" vs. "bad". Make the vowels extra long: "boooot", "baaaad" and look at what your lips are doing. The /uː/ in "boot" is a rounded vowel, i.e. pronounced with rounded lips. 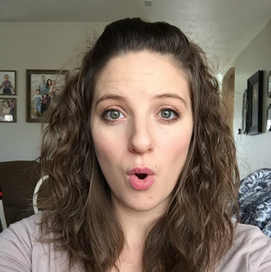 
Now let's assume that you're learning German or French and you need to acquire the German ü / French u sound. I will describe this as a general guide which you can use for ANY new vowel sound you need to learn.

Step 1: figure out which is the IPA symbol for the sound you want to learn. You could do so by consulting the Wikipedia German Phonology / French Phonology pages or by looking up any word that uses this sound on Wiktionary. In this case, IPA uses the letter /y/ to represent the German ü / French u sound.


Step 2: consult the IPA vowel chart. The Wikipedia version even has audio recordings for every single vowel! Locate the symbol /y/. It is at the upper left.

Step 4: as a beginner, try triangulation. If the instruction "say 'meet' but round your lips" sounds too difficult, you could triangulate: on the IPA chart, look for the nearest vowel with rounded lips that you know how to pronounce - that's /u/ - and then try to pronounce /i/ while keeping your lips in the same position as for /u/ (a mirror will help). The sound /y/ is born as the intersection between /u/ and /i/, combining traits of both.


You can apply this technique to any vowel you need to master, as well as to review whether you previously learned something correctly. I learned the International Phonetic Alphabet in a remedial French phonology class at university. They made all French majors take this class and learn IPA (despite being already at a level to read French literature) in order to improve their accent and it really helped!

Edited 5 months ago
1
#1
Do you want to crush your language goals? Sign up here.
ADMINISTRATOR

GermanPolyglot wrote:
For language learners, spending even an hour on learning the basics of the International Phonetic Alphabet is a great investment

Although I agree with this, I keep procrastinating. I may run out of languages before I get around to it.

Posted 6 months ago
0
#2
Want to learn more? See the other blog posts