A Great Network for you: the Polyglot Community

Theoretically anyone who speaks several languages (maybe more than three or four; it is debated how many exactly) can be called a polyglot, and that is how most of the world uses this word, if they know it at all.

However, when debating who should be welcome at polyglot events such as the Polyglot Gathering and Polyglot Conference, a different definition arose: one having passion as its main characteristic. Some went so far as to suggest that we should use “multilingual” for people who - by some stroke of fate, such as being born in Luxemburg or India or having to move somewhere for work - speak several languages without being interested in languages, while "polyglot" should be used for people who learn several languages voluntarily, simply because they like them. By that definition, a polyglot is someone who might...

Maybe "language aficionado" might be a better term? Then we could draw comparisons to e.g. camping aficionados. Everyone has probably gone camping sometime, but only camping aficionados would choose their destination based on whether camping is possible there. Even if they are sent to a business conference, they might find an excuse to camp instead of staying at a hotel. Same with polyglots / language aficionados: everything and anything is an excuse to learn or practice languages.

If the word "polyglot" characterises this mindset, then, so it has been argued, even people who don't yet speak several languages could be considered polyglots already. They are certainly already welcome in polyglot spaces. Less welcome are "Youtube polyglots": influencers who record videos saying "Hello! How are you?" in a bunch of languages and pretending that one can learn a language in a week (or: that all polyglottery is just a trick), devaluing the work of polyglots who have put years and years into their languages and actually reached high levels of fluency in multiple languages.


I just came back from the Polyglot Gathering, the first real-world meetup after the pandemic, and it was glorious! The Polyglot Gathering brings together 350-700 language aficionados for a 6-day informal program of geeking out over languages and sharing knowledge and advice. This is different from the knowledge and advice you might get from a high school language teacher or from a family member who has learned the language: the people you'll meet at polyglot events are people who have gotten good at self-study, people who have tried all kinds of serious and non-serious materials that are out there (you'll also meet some creators of language materials, and language bloggers), and who are in a unique position to compare and contrast - see for example this memorable talk comparing 10 Asian languages by a guy who actually learned 10+ Asian languages.

You'll also find fun activities on the program, such as learning salsa in Spanish, doing improv theater in Italian, having taster sessions of Ukrainian or Georgian or the like, and singing Disney songs in many languages. 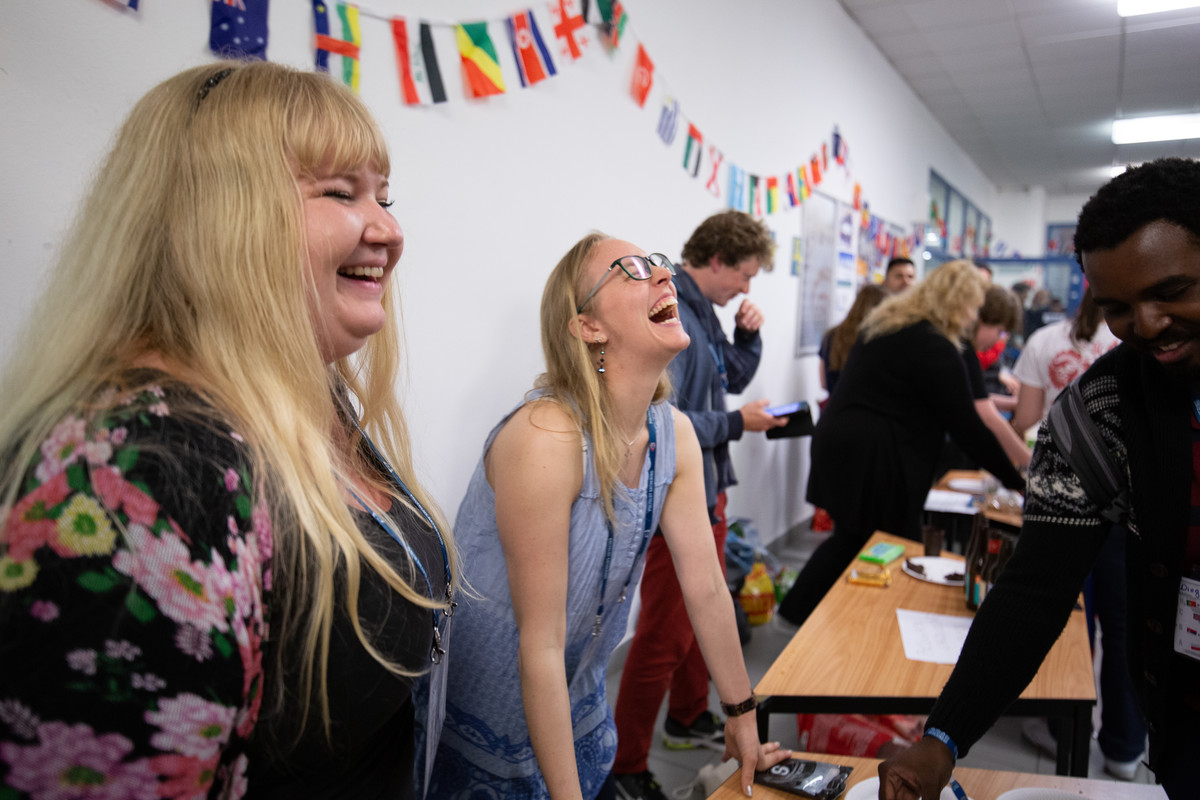 If the Polyglot Gathering is for informal learning and an exuberant summer camp-like atmosphere, then the Polyglot Conference is more serious, featuring also more lecturers from academia who have written a paper on the subject of their talk. The overlap of topics and participants is quite large though.

More than for any of the sessions or activities, people come to polyglot events for the sense of community. To finally be in a place where your interest in Icelandic is not met with raised eyebrows or uncomfortable silence but an enthusiastic "OMG! I want to learn that too! Do you have any tips?". A place where one of the lecturers (looking at you, Cesco) may spontaneously jump between various European languages every five minutes, reveling in the fact that in this unique setting the audience can follow. A place where dinner conversation might center around whether Rosetta Stone actually ever worked for anyone. And, for many of us, a place where we can feel normal - where having 6-10 languages on your name badge is typical rather than exceptional, and we can re-assure ourselves that we aren't crazy until we reach the 30+ languages mark that a handful of the participants have reached.

The Polyglot Gathering takes place every spring and the Polyglot Conference takes place every autumn. Both have also developed online formats during the pandemic. Outside the events, polyglots can be found on this site and in any space dedicated to learning various (rather than just one) foreign languages. Join us!

GermanPolyglot wrote:
Maybe "language aficionado" might be a better term?

I like this term! I actually think highly of "language hobbyist" too. Polyglot is a cool word to a native English speaker, because it's rarely used. But:

wrote:
Less welcome are "Youtube polyglots": influencers who record videos saying "Hello! How are you?" in a bunch of languages and pretending that one can learn a language in a week (or: that all polyglottery is just a trick), devaluing the work of polyglots who have put years and years into their languages and actually reached high levels of fluency in multiple languages.

This has ruined the word for many people. They say things like "I hate polyglots" to target these shysters, and don't realize they are hating on a lot of legitimate people too. It's sad.

wrote:
There are two main events for the polyglot community: the Polyglot Conference and the Polyglot Gathering.

Thanks for explaining the difference between the gathering and the conference. I need to go to one of these!