Recently, I heard native speakers of languages that have similar roots, such as Spanish and Portuguese, Italian and French are able to understand each other more than 50%. Does anyone have an idea for this?

You might want to see this article on lexical similarity. 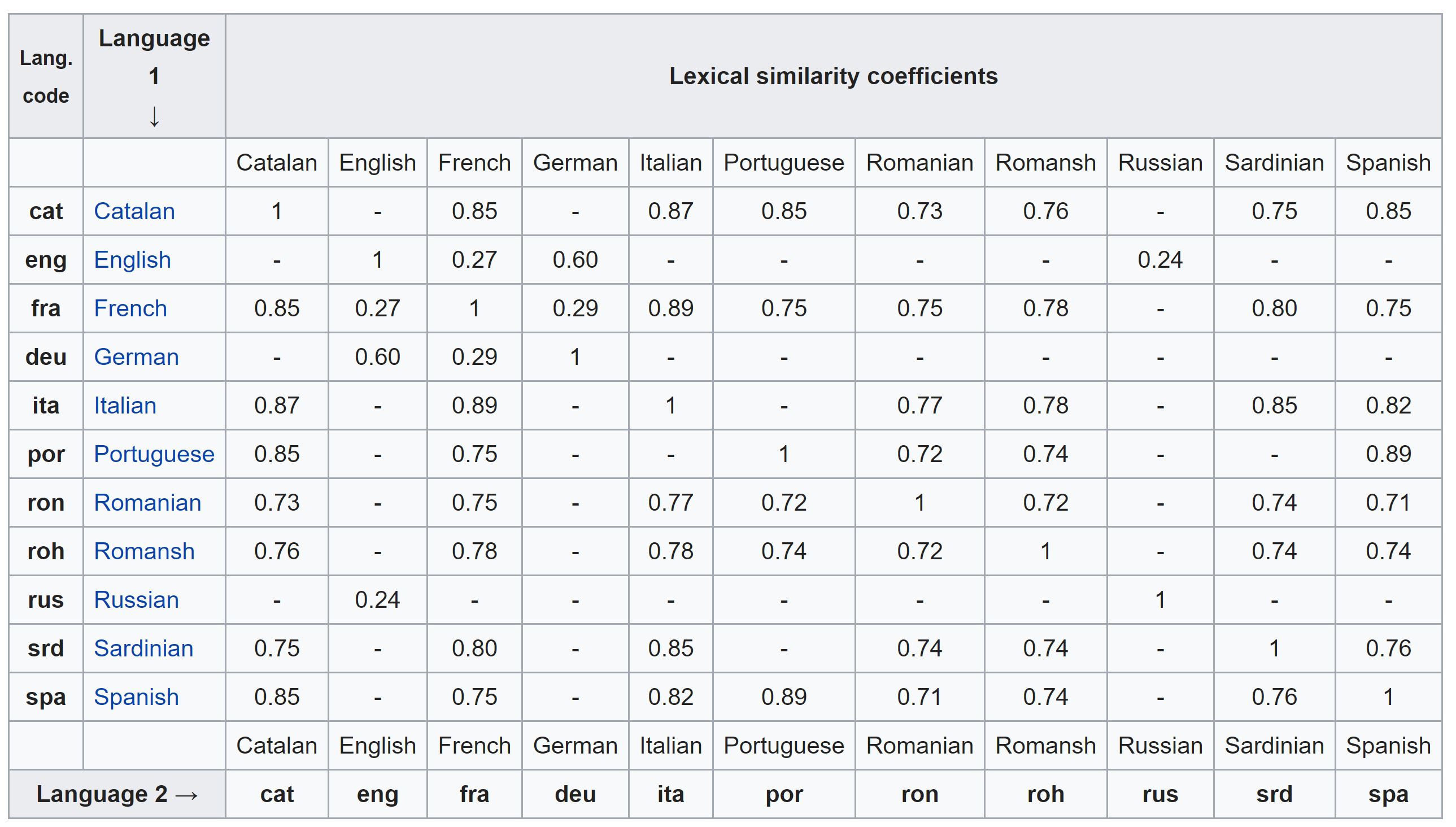 Very interesting article, leo. Although if I understand correctly they only make a distinction between words that are both similar in form and meaning and those that aren’t. But they are not taking into account the huge negative impact that false cognates have when trying to understand another language. And false cognates are usually really abundant between close related languages.


The other big factor is pronunciation. As a native Spanish speaker I would dare to say that I understand almost 90% of written Portuguese, but when listening to it I might only understand 40% of what is being said, and if we are talking about slang the number is much smaller. I think Portuguese speakers usually understand spoken Spanish much better though. That may have to do with the simpler phonetic structure of Spanish. I read somewhere that Portuguese has most if not all Spanish phonemes in its repertoire.


French is definitely not that close though. I would say I only understand 40 to 50% of written text and almost nothing when listening.

Thank you for giving me an exact answer for this question! I would like to ask you one more question relating to Spanish language. Do Spanish speakers understand different Spanish spoken in South American countries? One of my Chilean friends told me that Chilean Spanish is by far different from original Spanish. Do you understand what Chilean people say perfectly?

For the most part, we do. The standard ‘educated’ variant that you hear on the news and read in the papers is pretty much the same across all Latin American countries. There are some differences in vocabulary choice and pronoun use (Argentina, Uruguay, and Salvador use vos and its conjugations instead of tú for the second person singular, both being part of the standard language), but it’s all perfectly intelligible for the most part. As long as people keep a high register, make an effort to speak clearly and avoid slang, they can communicate without problems. I‘m Argentinian and I’ve had perfectly normal conversations with people from Venezuela, Colombia, and Mexico (the opposite end of the continent) with no hiccups whatsoever.


There will definitely be a big shift in accent though, so you will immediately notice if the other person comes from another country. Many of those accents are in fact very recognizable and, depending on the region, they can sometimes be so thick as to hinder comprehension. Chilean Spanish is probably the trickiest one in that sense. In my opinion, there are several reasons for this. First of all, they tend to speak faster than average, they have a different cadence (they speed up in parts of the sentence where we would normally slow down), and they also speak with a very distinct ‘melody’ which foreigners find extremely distracting. Their slang is also very distinct so it’s very hard to understand them when they speak in a lower register.

As an advanced non-native speaker I have no problems understanding Spanish from anywhere in particular. I learned Ecuadorian Spanish when I lived there as a child. But for many years I struggled understanding non-Ecuadorian speech. This melted away over the years, as I became more adept with the language and got more exposure to variations. Some accents sound more "different" to me than others though. For example, Argentinian (sorry Markos) sounds like it's influenced by Portuguese. The Z in Spanish from Spain, and the disappearing S in Caribbean Spanish are also quite noticeable. I used to struggle a bit with Venezuelan Spanish, but after having so many language partners and teachers from there it seems quite normal.

Haha no worries! No offense taken. If anything I would consider that a compliment since I love the sound of Portuguese

And I guess I can see the parallel. Our use of the pronoun vos and its corresponding verb conjugations are quite similar to the Portuguese você. Although I wouldn‘t say we got it from them, it’s just what happens with sister languages. We have to remember they were once dialects of the same tongue.


The words vos and tú have always been present in Spanish, and they are the just the singular versions of vosotros and ustedes. While vosotros fell completely out of use in the Americas (though still the norm in Spain), vos only remained as the pronoun of choice in a few countries like Argentina, Uruguay and El Salvador. Most if not all Spanish speakers would understand it pretty well as far as I am aware, just like we understand a Colombian replacing tú and vos with usted.


I guess what I’m trying to say is that, although for a foreigner these variations may seem like dialectical characteristics, for a native speaker they are just different choices within the alternatives provided by the language. This might be related to the frequent coproductions in cinema and TV including cast members from different countries. Many of us grow up watching soap operas and movies from different countries so we are somewhat used to it.